Free Shipping on all orders

International Defensive Training Systems (IDTS) is taking a proactive stance to protect women and children against the epidemic of sexual assault and abduction by providing education, physical training and a line of critical self defense products. Our mission is to stop violent assaults against women world-wide while changing the definition and implementation of self defense as a whole.

IDTS was founded by Marilyn Parker in 2008. Prior to starting IDTS, Marilyn had experience in corrections and then began investigating missing children and teens as a private investigator. Deeply troubled and moved by things she would see, Marilyn made it her goal to help women and children who were victims of sexual assault and attack. The best way she saw to do this was focus on what no one at the time was: Prevention.

In order to provide an effective form of self-defense, we first had to understand the methods of predators, who they are, how they manipulate, groom, lure, coerce, assault, and or abduct.

After extensive research including the interviews, IDTS found concrete evidence that predators use specific methods to gain access to their victims based on motive. They also used specific control points and carry methods to assault and or abduct their victim.

Our physical training program was formulated and tested based on those interviews with convicted predators, including rapists, murderers and sex traffickers. Based on their predatory methods IDTS founder Marilyn Parker designed verbal, psychological and physical curriculums. Armed with this knowledge, we designed and patented the Punisher Self Defense Glove with the goal of preventing these viscous attacks before they occur. We are continuing to expand our line of Self Defense and host in-person training events, all with the goal of preventing as many assaults or abductions as absolutely plausible.

If you are interested in our teaming up with IDTS, our classes, products, curriculum or have any questions please reach out to us below. 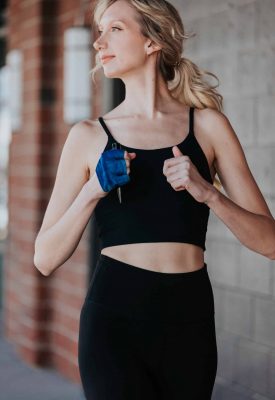 Unfortunately, some types of sexual assault cannot be prevented, but you can reduce your risk of assault by taking steps to ensure your safety by creating healthy physical, psychological and communication habits. For example:

How do I effectively defend myself in an assault?

Don’t underestimate the power of your voice as an effective defensive tool. If you feel your voice may fail you when you need it most, practice screaming and yelling. When practicing, get in the habit of yelling “FIRE” to bring attention to the situation. Bystanders are more likely to respond to “Fire” than they are to instances where “Help” or “Rape” are being yelled.

ALWAYS fight back! Interviews of convicted rapists found that lack of resistance from the victim became consent in the mind of the rapist and the lack of self-defense from the victim encouraged the rapist. The interviews also revealed consistently that resistance to sexual assault is much more effective than passive response, such as crying and pleading which may even encourage the attacker as they feel empowered. Sex is NOT the main motive for rape. It is the way for a rapist to release anger and power.

The predator interviews also disclosed that rapists and abductors were waiting for a woman or child to use a technique used in traditional self-defense, stating that they knew the techniques that would be used against them, including the eye gouge, foot stomp, groin kick, etc. Also, that they knew how to control the victims who were using these techniques, rendering those who used traditional self-defense, basic rape defense techniques, mostly unable to effectively defend themselves in a brutal and chaotic attack.

Attending self-defense training, based on real predatory methods and utilizing real life scenarios, such as the IDTS program can be extremely impactful. They can teach you useful skills that may one day save your life.

Rape is an act of sexual intercourse perpetrated against another person without their consent.

REPORTING A RAPE – Call 911 in an emergency.

Victims often feel they, rather than the rapist, are on trial. Fortunately, the last few years have brought about sensitization of the criminal justice system to the plight of the sexual assault victim. For example, recent legislation has blocked the admissibility of questions relating to the victim’s sex life because, as we know, a person’s sexual history does not invalidate a sexual assault charge.

How can I help?

Most victims experience sexual violence before the age of 25. You can help prevent sexual violence and sexual assault, which are recognized as a widespread problem in communities, organizations, and across campuses, through spreading awareness and encouraging responsible actions.

Bystanders, a message to YOU: This goes for anyone, if you are in a public or private location and witness any sort of sexual assault, you’ve instantly become a bystander by no fault of your own. However, the actions you take from that moment not only matter but could SAVE A LIFE!

Using the Punisher Self Defense Glove

The Punisher Self Defense Glove is a patented nonlethal impact weapon that delivers disabling blows with just 2.3 pounds of pressure! Non-lethal weapons are pain-inducing weapons used to minimize the risk of casualties and are less likely to kill a target. The Punisher Self Defense Glove Features a one-size-fits-all, no right or wrong strike design, and it’s easy to conceal.

Here are some quick tips for peak effectiveness:

Can I talk to my kids about Sexual Abuse?

Yes! Communication is important to keep your kids safe from sexual abuse. Create an environment within the home where kids are not afraid to share what they know about sexual assault and abuse. Be willing to share what you know about sexual abuse and how to prevent it with your children. Don’t use nicknames or pseudo names for body parts, teach your children the anatomically correct names. Children should learn to use these names, and in the case of a real assault, pseudo names are often inadmissible in court. Also, talk about consent and what is appropriate physical contact.

Introduce Safety Boundaries to Children & start early. Begin talking with your children in an age-appropriate way and set clear safety boundaries for them. The following list gives the five personal safety boundary rules: